2015 Look of the Day Recap: Makeup for Every Month!

Hi, everyone! Happy 2016! I hope your  year has been off to a wonderful start. Unfortunately mine has been rung in with a bad cold that has had me curled up in my jammies. I am determined to shower and apply makeup today like a regular human and I'm hoping that today's post brings some inspiration! I shared a Makeup for Every Month post last year, which was received really well (thank you!), so I thought I'd do the same for 2015. So here it is, my favourite Looks of the Day for each month of last year, with a couple extra festive "months" thrown in for good measure :) 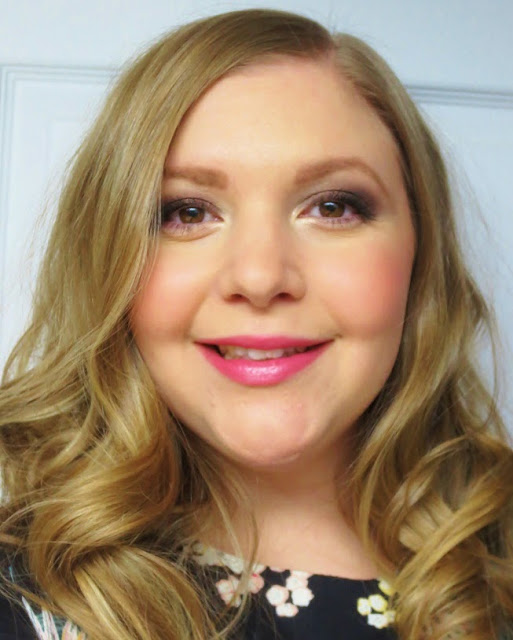 January's look was one I created on the night of me and my boyfriend's anniversary. Even though the date was low-key (we re-create our first date annually- coffee and grilled cheese), I thought I'd still opt for some sultry, romantic makeup. The smokey eyes were a combination of Make Up For Ever's Artist Shadows in Black Gold, Silver Brown, and Golden Beige, and Bobbi Brown's Long-Wear Cream Shadow in Velvet Plum and Long-Wear Gel Eyeliner in Black Scotch. The lips were a new favourite (and still much-loved) lipstick: MAC Sunny Seoul. It was a perfect complement to the blush, Hourglass Incandescent Electra. 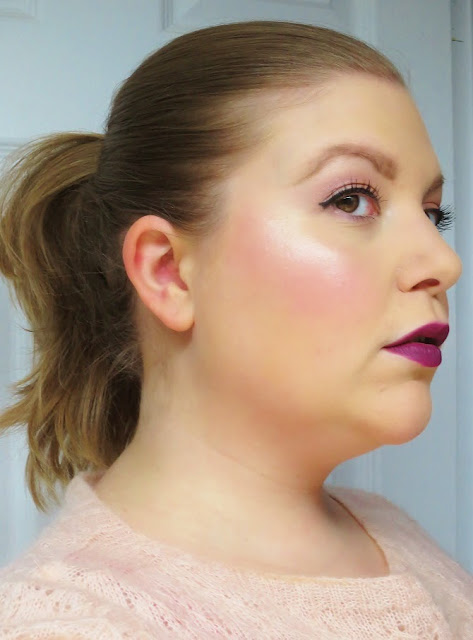 February's look focused on another romantic occasion: Valentine's Day. I was aiming to create a non-traditional, yet still Valentine's appropriate look, and I did so with dewy skin and shades of purple. The star of the show was Revlon's Matte Balm in Shameless, a bold, yet totally flattering deep purple, and the glowy complexion was created courtesy of the ivory shade from Wet n' Wild's Walking on Eggshells eye shadow trio. I created soft, rosy lavender eyes thanks to Walking on Eggshells and another drugstore gem, NYC's HD Eye Shadow Trio in Late Night Latte. 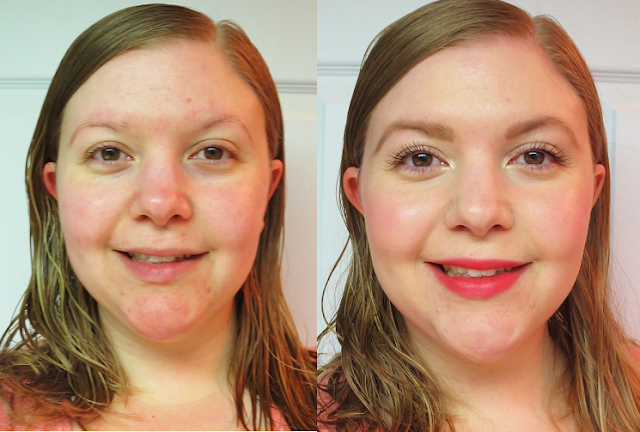 March's look was not a bold one, but was nonetheless an interesting one for me as I only used 5 products (a rarity for this makeup fiend). The before and after shots reveal that only 5 items can really make a difference! The items that made the cut for this look were Cle de Peau Concealer in Ivory (the world's best concealer, in my humble opinion; the coverage is flawless, yet beyond natural!), NARS Matte Multiple in Siam (adds the most flattering red flush to lips and cheeks), Anastasia Brow Powder Duo in Taupe (my holy grail brow product), RMS Living Luminizer (to add glow to the lids and high points of the face), and BeneFit They're Real Mascara (lashes for days!). 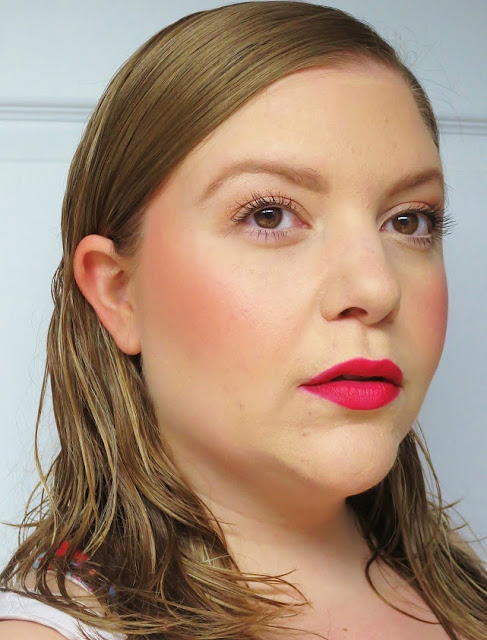 April's look featured two goodies I picked up in Sephora's springtime VIB sale. The lips were my first dip into Too Faced Melted Liquified Long Wear Lipstick range- Melted Strawberry is a beautiful warm fuchsia red with a full-on opaque finish. But it was really the blush that won my heart most- Clinique Cheek Pop in Cola Pop has been one of my most-loved makeup items of the year! It's deep berry red hue is intimidating in the pan, but oh so beautiful on the cheeks. 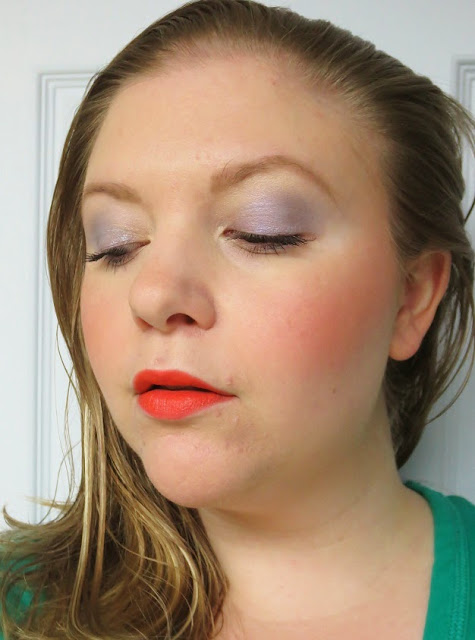 May's makeup was a clear indication that I was eager for the warmer months to come. I still really love the combination of orange and blue- a mix I reach for rarely, but one that really works! The blue hue on the eyes was courtesy of The Body Shop's Colour Crush Eye Shadow in Boyfriend Jeans (love these shadows and the shade is ah-mazing) and the orange lips were brought to you by Milani Colour Statement Lipstick (another drugstore fave of mine) in Sweet Nectar. Milani's Baked Powder Blush in Luminoso then pulled the whole look together! 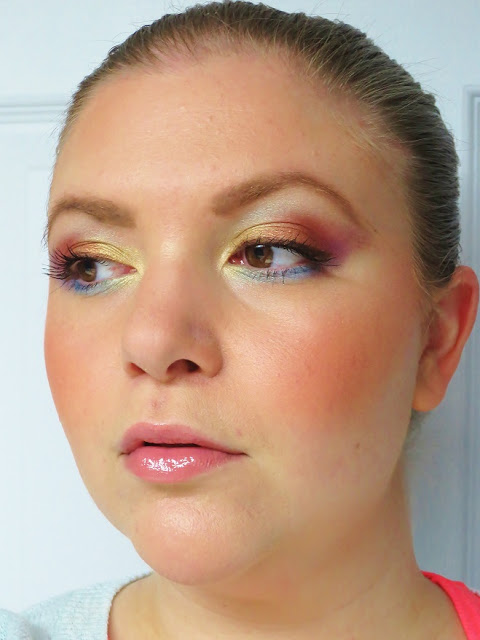 June's look was one of my most loved of the year- it celebrated Toronto Pride with some serious (yet still wearable) hues of the rainbow. To create this, I combined my already much-loved rainbow wonder, Marc Jacobs' Style Eye-Con No.7 Palette in The Siren with my newly-acquired Coastal Scents Go Palette in London. The cheeks were equally vibrant, thanks to Daniel Sandler's Watercolour Fluid Blusher in Trip, a neon orange. To contrast the bolder eyes and cheeks, I reached for NYX Butter Gloss in Tiramisu, a beautiful glossy nude lip colour. 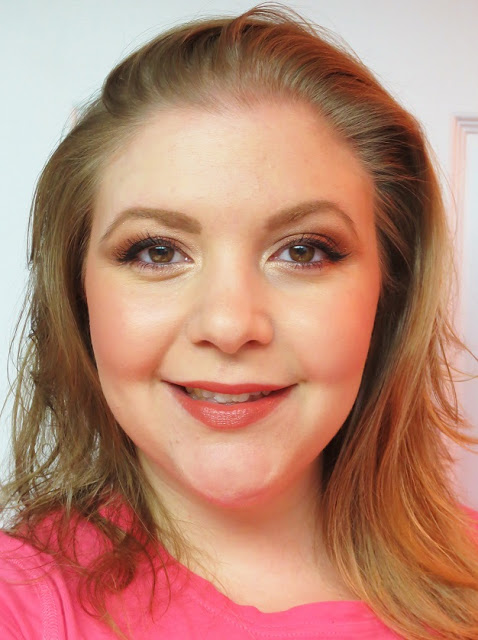 July's look was a celebration that the Charlotte Tilbury counter had finally opened in Toronto! I'd been lusting after the brand since its release and pre-ordered the heck out of several items in order to get my paws on them asap. The crown jewel of my purchase was the Luxury Palette in The Dolce Vita, a killer mix of copper, rust, ivory and gold. This look featured around the Dolce Vita feel, also including bold winged liner, peachy cheeks (Charlotte Tilbury's Cheek to Chic Blusher in Ecstasy) and caramel lips (Charlotte Tilbury K.I.S.S.I.N.G. Lipstick in Stoned Rose).  Oh yeah, and this was the look I wore to meet Ms. Charlotte Tilbury herself. No big deal ;) 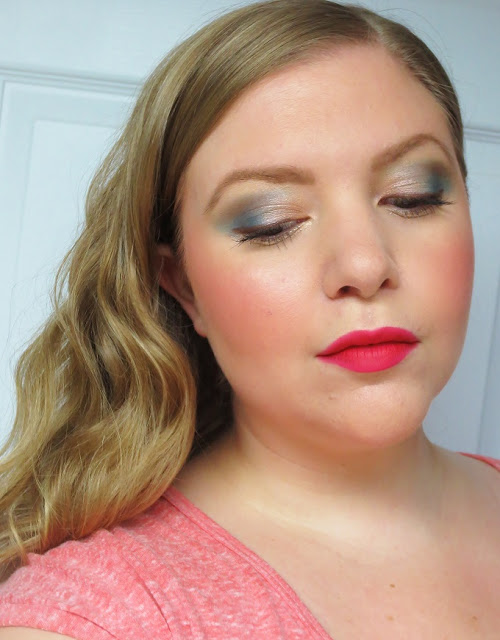 August's look was just one of several ColourPop-driven looks that month. I'd been eyeing up the brand for months and in August I finally succumbed and ordered a boatload of products. I chose this look as my fave because I'm happy to promote the idea that "yes, you can wear blue eye shadow and red lips and not look like a clown!". I used ColourPop's Super Shock Shadow in Coconut to colour the eyes (one of the prettiest blues ever!) and ColourPop's Lippie Stix in Frenchie to add a pinky red stain to the lips. The cheeks were likewise rosy thanks to ColourPop's Super Shock Cheek colour in Jelly Fish- another huge favourite of 2015. 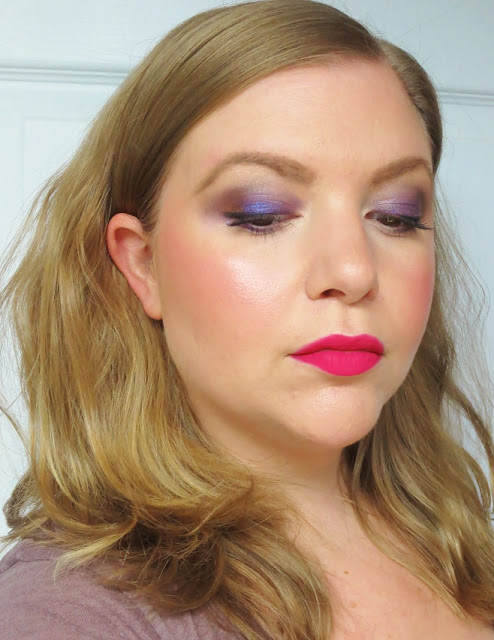 In September the ColourPop love was still going strong. I'm a sucker for purple eyes and fuchsia lips and this look  highlights this love perfectly. The eyes were all about ColourPop's Super Shock Shadow in Lace, one of the prettiest shimmery purples shadows out there. I added glow to my complexion with ColourPop's Super Shock Cheek highlighter in Highly Waisted, a unique golden pinky peach, and created the bold, matte pink lip with ColourPop's Ultra Matte Lip in Mars. It's a beaut! I also loved this look because it re-created Charlotte Tilbury's Glamour Muse iconic look at a much more affordable price point. 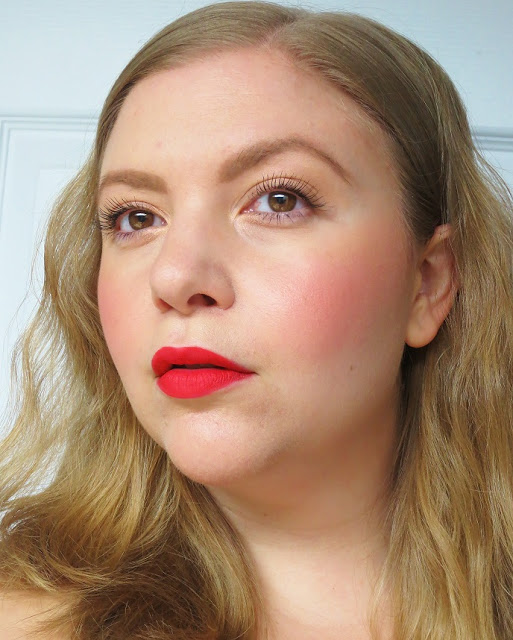 Haha, clearly a trend is evident here- my favourite from October was also a combination of ColourPop goodies. I loved this look because it focused on a bold lip, fresh cheeks, and kept the rest of the face rather bold and basic. The gem of t his look was my favourite of the Ultra Matte Lip colours, Succulent. It really is a perfect warm red! The cheeks were flushed with ColourPop's Super Shock Cheek colour in Fruit Stand, a killer matte coral, and lashes were bulked up by one of my favourite mascaras of the year, The Hot Shop's Long Lash Mascara, courtesy of the ultra affordable Born Pretty Store. 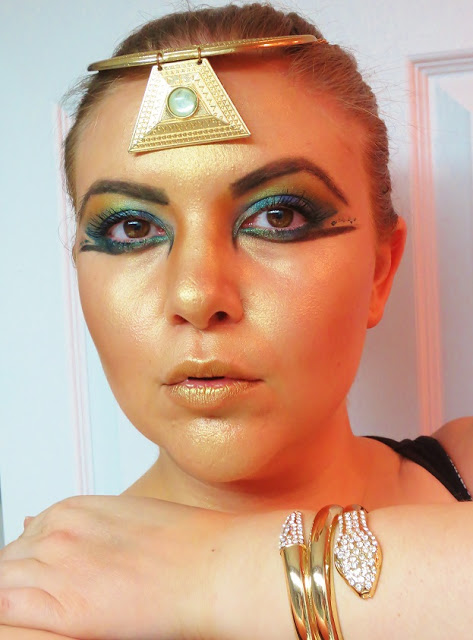 Okay, so Halloween is clearly not a month, but I thought it deserved its own category as it's always something special! This year I decided to channel a bit of ancient Egyptian mystic glam with a theme of gold and teal. I added some ancient patina to my complexion by mixing in MAC Old Gold Pigment with my foundation and painted my lids with Charlotte Tilbury's Eyes to Mesmerize Cream Shadow in Cleopatra and the bold teal shade from the Marc Jacobs The Siren palette. Add some dramatic black and teal liner and some gold jewelry and voila! 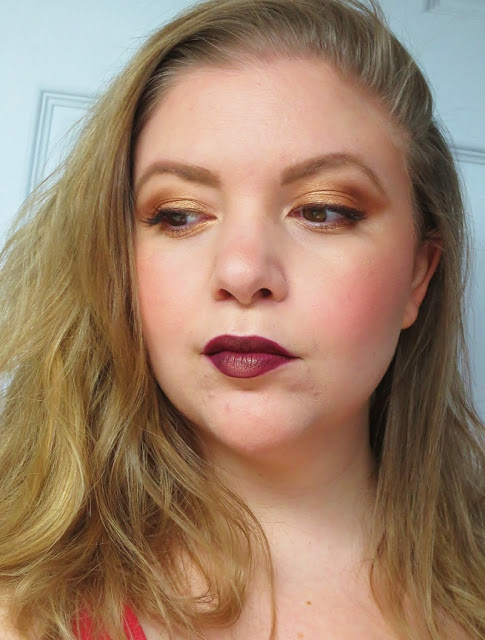 As with April's look, November's also highlighted some products I selected during a Sephora VIB sale. I always try to carefully curate my Sephora sale picks, so it's no surprise that I'm happy with the looks I create with the goodies I've purchased. The eyes in all their burnished metallic gold glory come courtesy of NARS' Eye Shadow Duo in Isolde (an instant favourite) and the vampy lips were created with Kat von D's Everlasting Liquid Lipstick in Exorcism. I patted a bit of the Isolde eye shadow shades on the centre of the lip for some extra dimension, which I think finished off the look nicely! 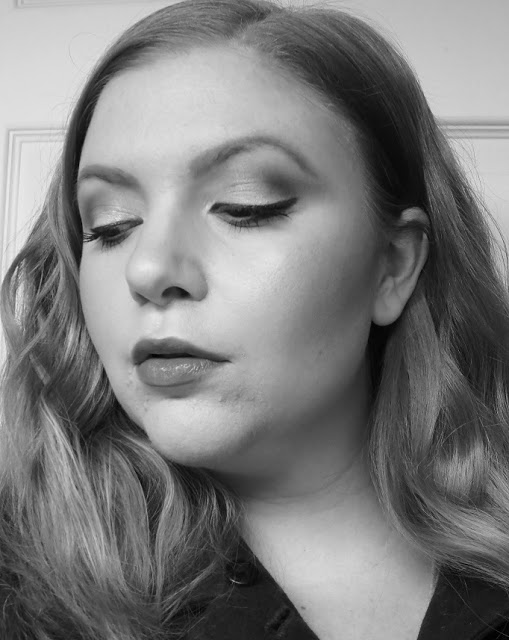 Hello... it's December. Given how fierce Adele looked in her now-iconic music video, I could not help but emulate the look. Given that the majority of look photos were in black and white (playing homage to the video), I paid much attention to majorly sculpted (yet perfectly blended) eyes and cheeks, killer winged liner (thanks to Bobbi Brown's Long Wear Gel Eyeliner in Black Scotch) and perfectly painted lips (my new favourite near-nude, MAC Satin Lipstick in Brave). My makeup will never be as incredibly fierce as Adele's but it was hella fun trying! 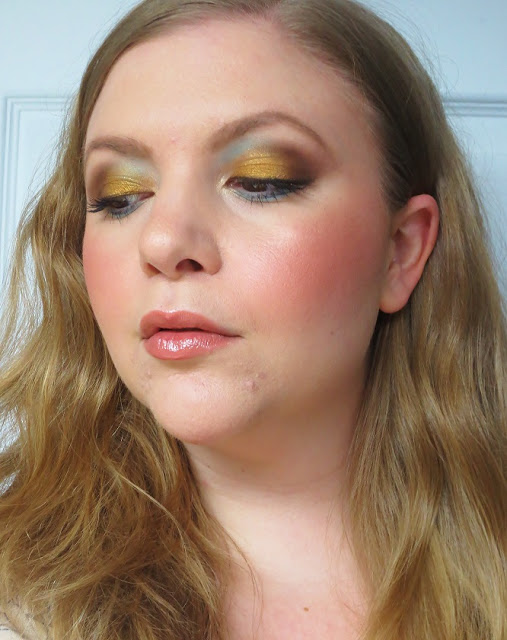 Again, Christmas is not a month, but I created a few fun holiday looks this year, so thought I'd create space to feature one here. I chose the look above because it is so opposite from my traditional gold-eyes-red-lips Christmas look, yet is still perfectly festive! Plus, it featured the beyond incredible Marc Jacobs Style Eye-Con No.7 The Night Owl palette, the most amazing mix of gold, teal, plums, and neutrals. It also highlighted another new favourite another instant favourite, Becca's Champagne Glow Shimmering Skin Perfector Pressed palette a fabulous and much underutilized nude gloss, Chanel's Glossimer in Zephyr.

Phew! I hope you enjoyed this walk down makeup memory lane! I'm hoping that 2016 includes even more colourful looks and even more unusual, artistic, editorial makeup inspiration. Most definitely a blogging goal for this year!

Which of these makeup looks was your favourite from the year? Any other faves that I didn't feature? Also, feel free to link some of the makeup looks that you created in 2015- I'd love to see them! :)

Have a wonderful day!