IMATS NYC: A Match Made in Makeup Heaven!

Hi, everyone! I'm fairly certain I've started a blog post with just such a statement before, but let me reiterate: if there are two things in life that forever excite and inspire me, it's makeup artistry and New York City. My eternal muses! So when my beauty blogger buddies proposed the idea of attending IMATS in New York City this Spring, it was an absolute no-brainer. Um, yes- sign me up! If you've been following me on Instagram, you'll know that IMATS New York was this past weekend, and let me tell you- it was a whirlwind of excitement!

If you're unfamiliar with the event, IMATS is the International Makeup Artist Trade Show, an epic conference that hits up several global cities each year. It features makeup demonstrations and competitions, talks from celebrity makeup artists, and fantastic deals on professional and hard to find makeup brands. I've visited IMATS Toronto twice in the past (get the lowdown here and here), so IMATS New York was the next logical step! 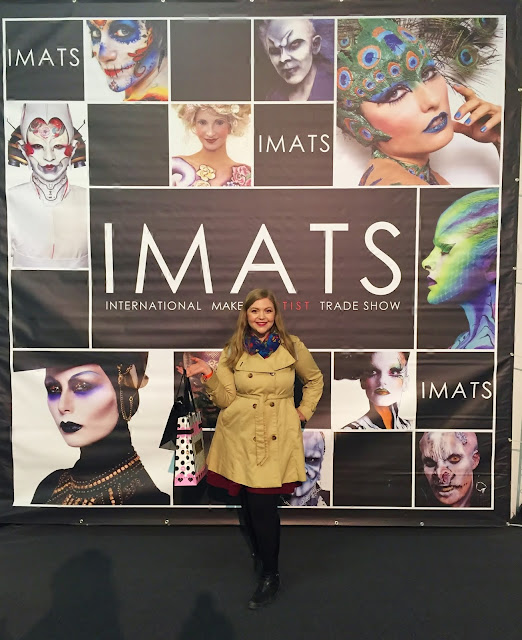 The event was held at Pier 94, on the west side of Manhattan on the Hudson River. It was a bit of jaunt from our hotel in Chelsea, but luckily the Saturday morning traffic was light and we got there in a flash! Doors were set to open at 9am and we planned our arrival for just after 8am. Long lines are expected, so we woke up early, gulped some coffee, and went for it! Word on the street was that some people arrived as early as 6:30am, which we found to be totally unnecessary. The line was handled super efficiently, so, even though we were a ways back in line, we still made our way into the venue less than 10 minutes after doors opened.

The wait in line was chilly, thanks to the overcast sky and crisp river air, but Laura and I passed the time by reviewing the venue map, planning our shopping strategy, and playing "guess that lipstick" as new characters joined the line behind us. I also snapped a photo of my IMATS Look of the Day, which drew on some staples: the Urban Decay Naked Palette, Hourglass Ambient Lighting Blush in Radiant Magenta, and Too Faced Melted Lipstick in Melted Berry. 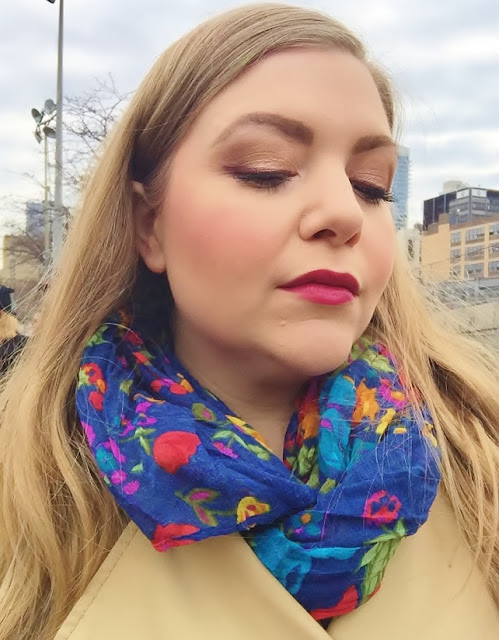 Upon entering the venue, we were super pleased to see that the hall was open and spacious, without a crowded mosh pit in sight. It remained this way for at least an hour, which was such a surprise! We were totally expecting to brave hoards of aggressive makeup fiends, but this was not the case. With the exception of a few booths (Morphe and Anastasia, for example), the lines were totally manageable and accessible. Even more so than in Toronto!

My first stop after entering was the Obsessive Compulsive Cosmetics booth, which was featuring their new, utterly stunning Magnetic Fields Spring collection. They were selling their iconic Lip Tars and Cosmetic Colour Pencils for only $10 each (normally $16 USD), to my total delight. 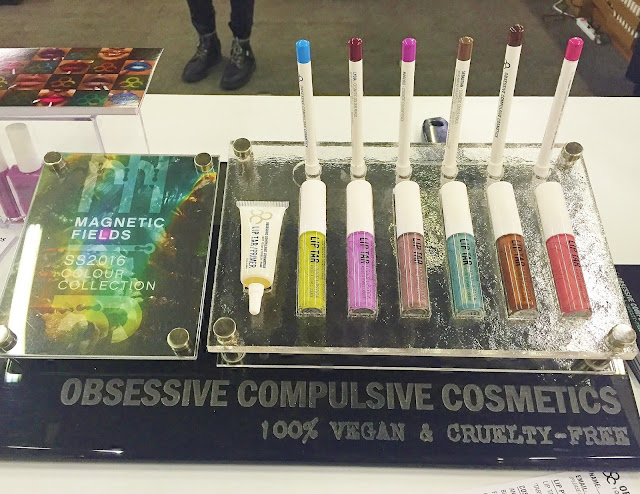 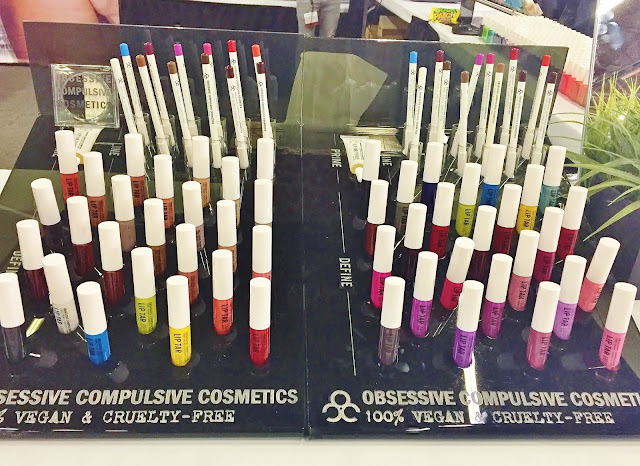 Although I didn't end up spending any money at the booth, I was eager to check out Sugarpill, who offers amazing bright colours with a fun, defiant attitude. They were selling limited edition pigments and lipsticks, as well as a full range of bold eye shadows. 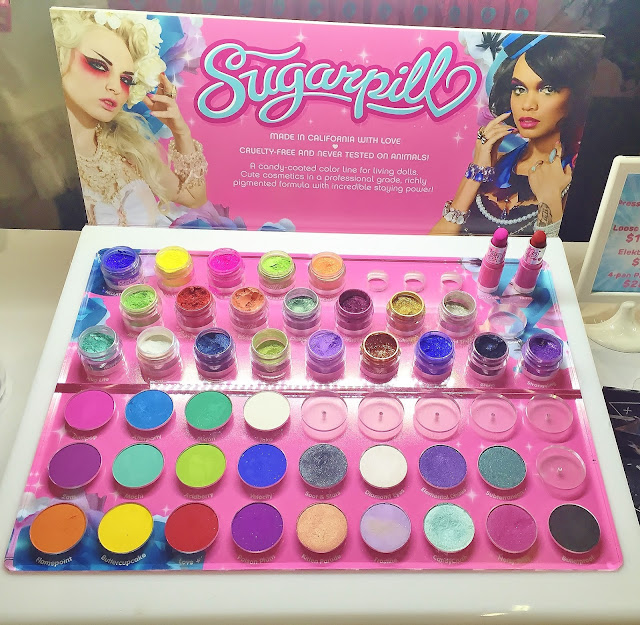 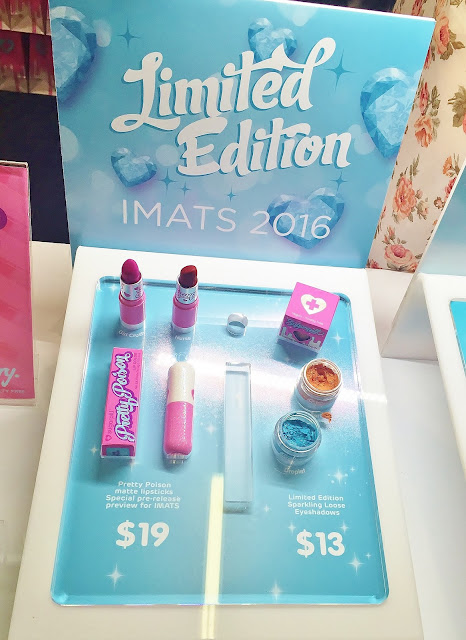 My  next stop was an utter delight, the Besame counter. Besame is known for their iconic shades of red lipstick (in addition to a full range of products) and vintage aesthetic, which are completely up my alley. The booth was set up like a 1940s boudoir and the sales reps looked right out of a glamorous time warp. I loved it! 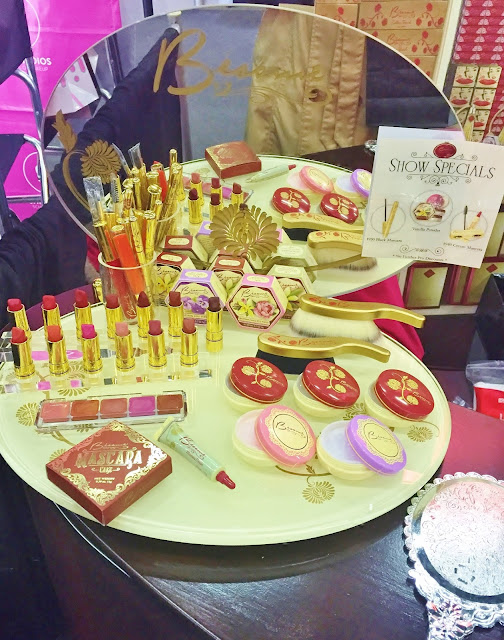 Their lipsticks were selling for $20 (regular $22 USD) and I could not help but swatch nearly all of them. Each was more stunning than the last. So rich and pigmented! Truly a red lipstick lover's dream. 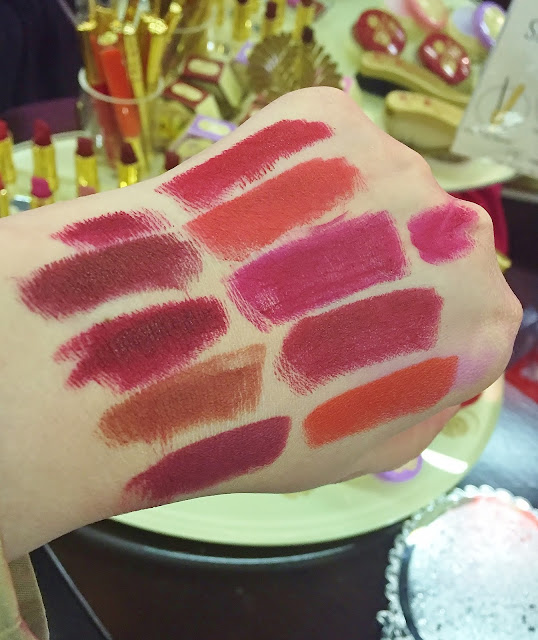 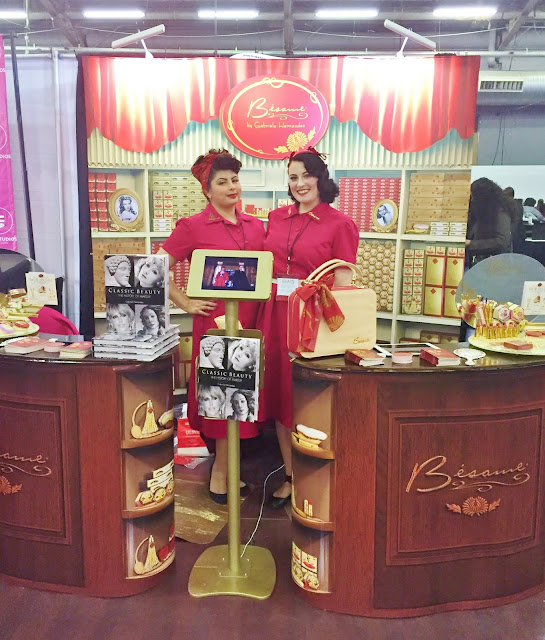 I then wandered up to the Violet Voss booth, which featured two separate tables- one showcasing the brand's iconic glitters and lashes, the other housing their newer, instant cult favourite eye shadow palettes and highlighters. The shadow palettes were being offered for $42 (matching a current sale on the brand's website) and the highlighter trio for $25. Or, you could buy all three for $100. Not a bad deal at all! 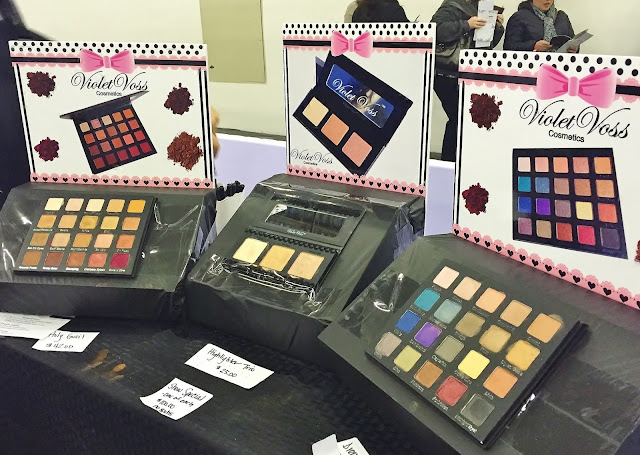 I was also eager to stop by the Mehron booth, who features an impressive range of both functional neutral palettes and ultra-vivid brights. 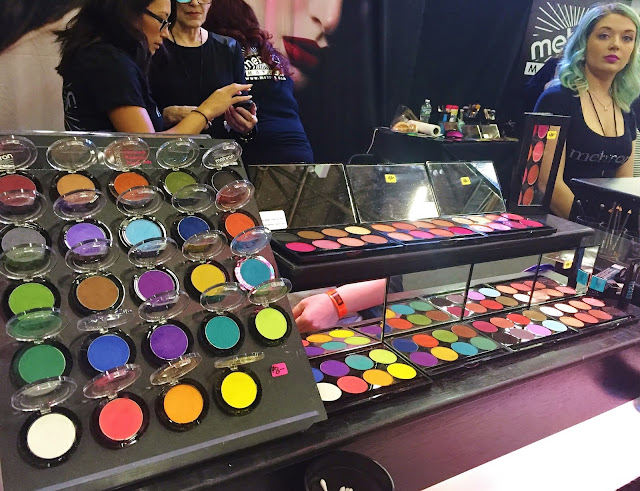 As with IMATS Toronto, there were several amazing makeup demonstrations in progress throughout the venue. There was this stunning glittery hair at the Make Up For Ever Academy... 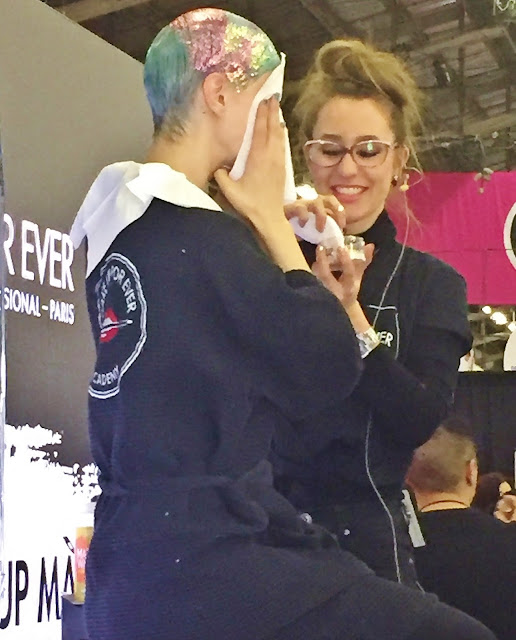 ... this bat girl undergoing a metamorphosis... ... and this stunning stark white face paint, just to show a few! 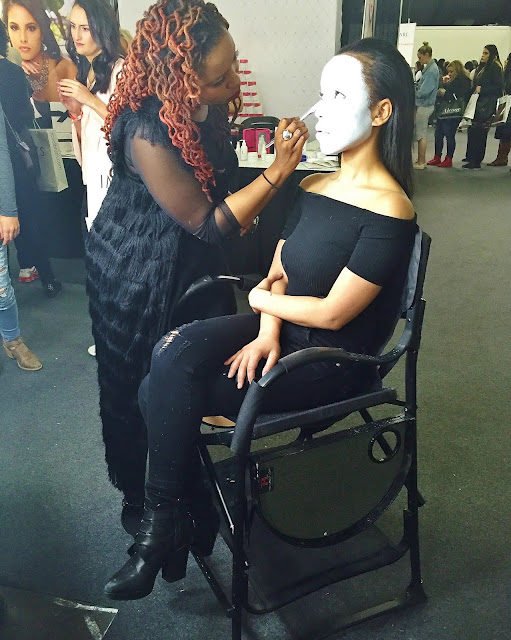 And of course the day was made extra special since I was accompanied by some lovely ladies! Here is some selfie time at the Beautylish booth with Chelle: 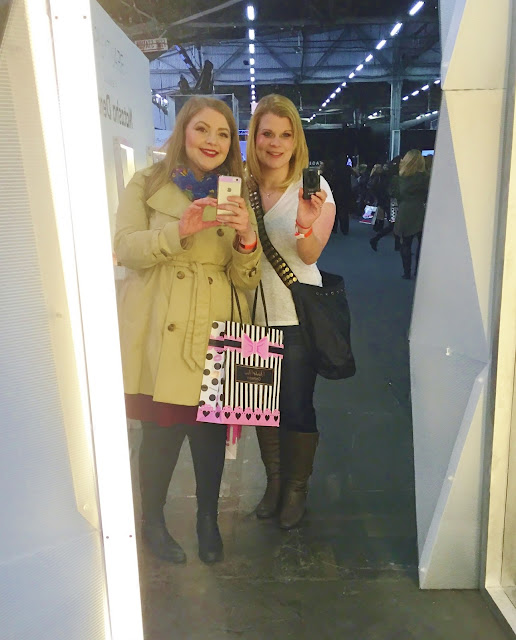 ... and some serious posing time with Chelle and Shawna. Our trip troupe also consisted of Julie, Laura, and Laura's lovely friend Elaine. They all made for fantastic travel companions and fellow makeup geeks :) 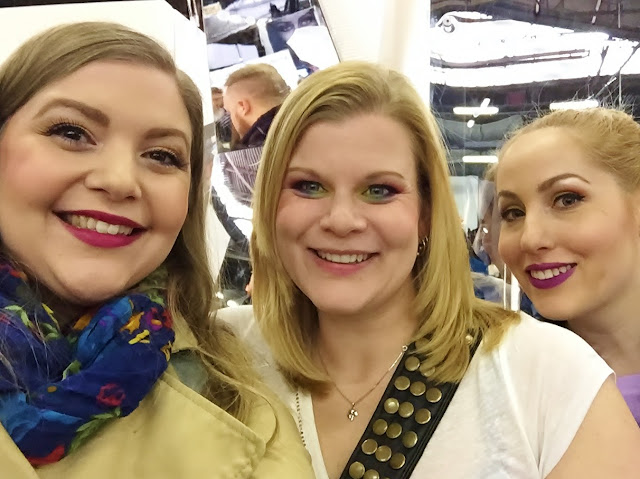 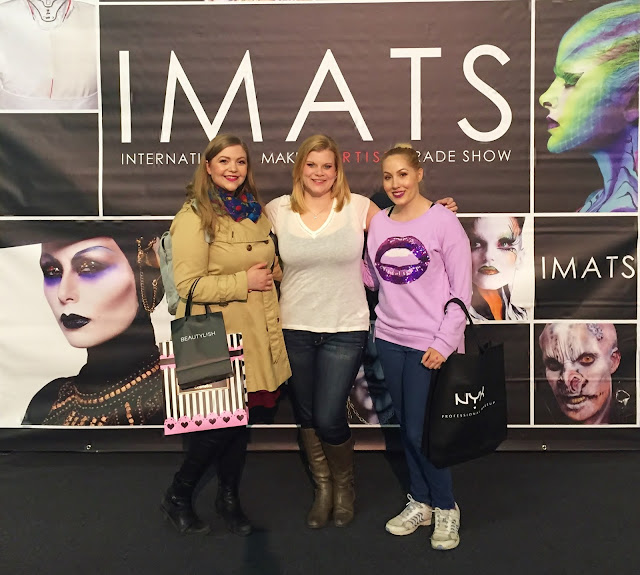 Other vendors of note were Lime Crime, whose divisive reputation is matched only by the bold, colourful attire of its employees... 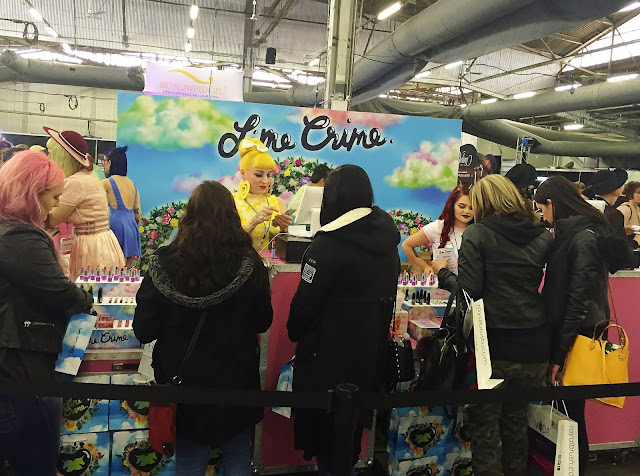 ... and online vendor Beautylish, who was solely featuring Natasha Denona cosmetics at the show. A wise move on their part, as the brand has gained instant fame due to the intense pigmentation of their eye shadows and even more intense price tags. Their large eye shadow palettes have a payment plan option! But I have to say, the shadows were even more lovely than I expected. I could have swatched them all day! 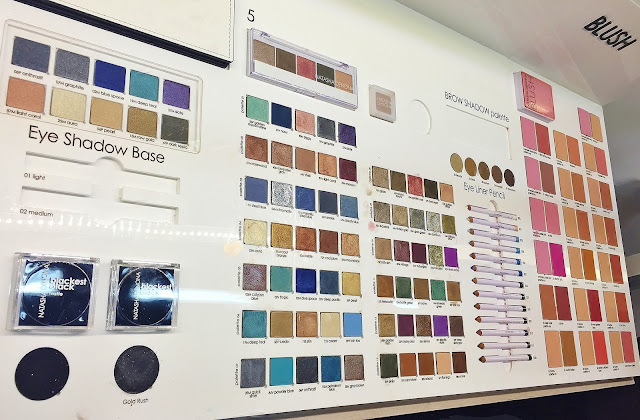 My IMATS New York experience was capped off in the most magical of ways- my ultimate makeup artist Lisa Eldridge, who was the keynote speaker of the conference, conducted a Q and A, followed by a book signing. This was such a thrilling experience for me that I won't be covering it here, but rather be writing a whole separate post about it. Keep your eyes peeled for a Lisa Eldridge x IMATS post very soon! 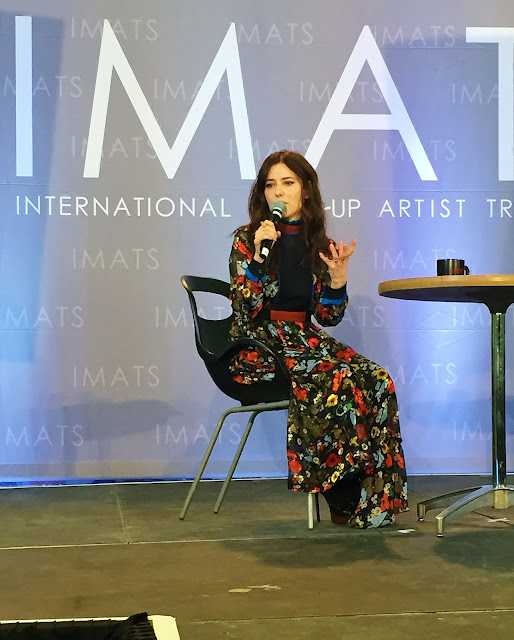 I hope you enjoyed this IMATS New York recap- I could not have asked for a better marriage of my passions. Makeup artistry mania set up with a NYC backdrop really is a dream come true!

My next several posts will be all about our trip to New York- it was such a packed, exciting weekend that there's lots to share!

Hope you're having a wonderful week :)